From version 2.0 HIDmacros can execute scripts as macro actions. Any scripting language installed to windows active scripting can be used. Windows contain by default VBscript and JScript.

Application possibilities are extended with scripting support. Inside the script several special commands provided by HIDmacros application can be used. Putting all together typical tasks handled by scripts are

Every macro can contain script source which is executed when macro is activated. Apart of these script codes there is one global section used for global definitions and initialization code. This section is accessible on Script page.

This is good place do define routines (procedures and functions) that will be used from macro scripts. Also any variable defined here is globally available in macro scripts. Global variables are usable for example for keyboard profiles. You can have global variable called e.g. PROFILE and based on its value (assigned by some macro = key on keyboard) other macros with script code can behave differently. This is used in scripting example described below.

There are compile buttons available to compile routines code or macro code. There is also Compile all button that compiles routines code and all scripted macros. Macro script code must be compiled. Otherwise it is not executed when macro is activated. There is also red/green indicator next to script window showing whether current code is compiled or not. Global indicator is located in application status bar. If it says "Scripts compiled" it means routines code (the global code) and all scripted code in macros are compiled.
Technical note: As all the code is scripted the process behind is not real compilation. When you hit Compile button HIDmacros just take the code and load it to scripting engine. Only syntax check is done at that time. But note that initialization code in routines source which is not inside procedure or function is executed during compilation (load to scripting engine).

There are 2 possibilities how to send key sequence from script.

Following example shows both methods. The example is in VBscript.

On second example you can see how to activate some window using standard VB script command. When you work with Wscript.Shell object often in your macros, it's better to dim & create this variable in routines section.

The AppActivate method takes as parameter window title or its handle. If you're not sure what is window title, check titles of all currently visible windows on Script tools tab.

All clicks returns mouse pointer to current position. It means mouse pointer moves to new position, performs operation (click or double click) and returns where it was before macro execution. For action 0 (mouse move) this return is of course not done.

A few words about delays. I've got many requests to include delays into keyboard sequence in HIDmacros. With scripting it's quite easy so there is a command HIDMacros.Sleep which takes number of miliseconds as parameter. However it's not that easy in reality. If you try to use delay together with key operations, you realize that Active scripting somehow delays keyboard messages and delay between keystrokes doesn't work. Whole execution gets delayed and keystrokes are sent at once. Mouse operations seem to work fine with delays so you can send e.g. 2 mouse clicks with delay between - giving some time to paint a menu for example. But there is one more problem. With delays and generally with scripting (loops) it can happen that macro execution takes quite a long time and HIDmacros gets blocked. My original plan was move script execution to new thread and keep HIDmacros to process other keyboard triggers. But it doesn't seem to be that easy to move all the DOM stuff around scripting to special thread, so this is my next plan and investigation. Until I have macro execution in threads, it's always your risk & responsibility to create quick macros. During macro execution another macro is not activated

So finally example of Start - Run activation at screen 1280x1024 with delay.

WSH can be used in macro script. Global object WScript is not available, but you can create WshShell and WshNetwork objects via CreateObject command.

and in macro only call methods of this object

FSX events can be sent also from script using command:

You can also send some text to FSX screen by command:

Example for both commands:

You can also read and write FSX variables through commands using SimConnect interface. However there are some limitations. Currently HIDmacros work only with float and sting values.

Reading FSX variable through SimConnect is not simple, because the interface is message driven. So you first ask SimConnect to send you values of some variable and then you receive messages when value changes. It means you must first tell HIDmacros that you will need some variable and only then you can read its value. Writing is easier, because here we don't need to wait for message with result.

So here are the commands for FSX variables management.

Only some variables are writable. When possible it's better to use FSX event to control simulator. Variables should be registered only once, so routines section is good place. Do not register too many variables. Once variable is registered, FSX will send a message to HIDmacros every second when value changes, even if you don't read the variable. If you try to read variable that was not registered, you'll get 0.

With Peter Dowson's FSUIPC you can access simulator variables in similar way as with SimConnect for FSX. I would say Peter's interface is more "technical", but works with other simulators like FS2004 or FS2002. For all details about supported simulators, variables mapping etc please refer to Peter's web page and mainly FSUIPC SDK package.

HIDmacros brings several functions to read and write variables through FSUIPC. To use those functions FSUIPC of course must be installed.

Size parameter tells how many bytes will be read or written. For int functions (GetFSUIPCInt and SetFSUIPCInt) this can be between 1 and 8. For float functions only size 4 and 8 bytes is supported (float or double float). Function GetFSUIPCRaw read part of memory and return string representing memory dump. It means every byte is represented by 2 characters in hex format, for example byte 44 would be returned as 2C. By writing a string to offset 0x0D70 you can execute FSUIPC macro or LUA script (in registered version).

There's special buffer built in HIDMacros. It can be set by script or directly from keyboard. Its value is accessible via script commands.

To set buffer content via keyboard you have to define new macro for each key and as action choose "Send to buffer".

There are several commands available for buffer operations:

StrRPad is string padding function that adds append char to value string to have count characters. If provided string is longer than count, it's truncated from left.

Game devices are supported because their buttons can be used as toggle switches (with permanent on or off position). To use this funcionality in scripts there is special method:

Of course you have a question: What are the names of axis that my joystick supports? The answer is easy: check yourself. Switch to Script support tab and Game axis sub-tab and see all possible axis names that HIDMacros recognize and moving you joystick you can see what is the axis name and what are possible values.

Want more? It's nice to read axis value in the script when button or key is pressed. But what if you need to control something directly with axis. What if axis movement could call a script...

With RegisterAxisEvent you can tell HIDMacros to call some procedure present in routines section every time when axis of your game device changes by some delta value. Parameters are:

With this feature you can control more things with one axis, you can use keys to change axis meaning, you can set up your own null zones for axis etc. There's also similar function to unregister axis callback:

For most axis values provided by DirectX are between 0 and 65535. Usually you need to recalculate this value to your own range. There are 3 supportive functions:

Function AxisRemap is used for mapping part of device axis to some range of values. It has following parameters

Example 1: Following example should make this complicated description more clear. Imagine we have throttle axis that should be mapped to forward throttle and reverse with some null zone between. Forward value (sent to simulator) is between 0 and 100, reverse value is between 0 and 60. And to make it more complex (however based on my real Saitek's throttle lever) let's have game axis returning 0 for fully extended lever (100% throttle) and 65535 for no throttle. If we want to map reverse between 0 and 20% then have 20-30% null zone and 30-100% throttle then AxisRemap should be called with those parameters. 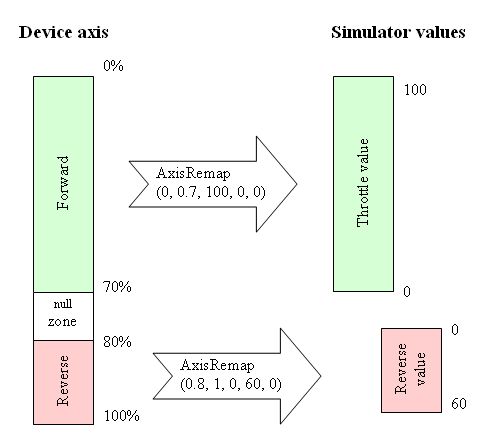 Example 2: use joystick to emulate keyboard. Store letter to buffer and emulate key press on button.

Example 3: map reverse to throttle axis in FSX. Don't forget to unassign axis in FSX, throttle is controlled by script only. AxisRemap is not used here to demonstarte how to calculate values in script.

From version 2.1 it is also possible to execute X-plane commands. Those commands are the same as in controls assignment in XPL. XPL commands can be executed via script command or directly in macro definition.

Important: For X-plane access special plugin must be added to X-plane which HIDmacros uses to exchange data. This plugin is file HidMacrosXpl.xpl located in xpl subdirectory of HIDmacros. You have to manually copy this file to X-plane Resources\plugins subdirectory.

For array operations indexes are zero based. To find out array size, provide any negative number as pIndex. Strings are also supported in GetXplVariable and SetXplVariable. However X-plane offers only a few string variables.

With my keyboard I used numeric pad to quickly set autopilot heading or VOR1 course bug to specific value. 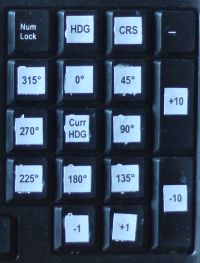 My whole FSX keyboard is used mainly for Twin Otter offline flying. It's wireless and has those stickers:

XML configuration file for FSX can be downloaded here.