I have a foot pedal that is a HID "keyboard". hidmacros works perfectly with it except for one little thing...

What I need is for that pedal (that is equiavalent to key "1" on the keyboard) to be completely remapped to another key on the keyboard (say, "W"). By "completely", I mean that I don't want it to *activate* a macro; when I press the pedal and hold it down, I want Windows to believe that I pressed and am holding down "W" key on the keyboard.

Think it is possible?
Top

Currently it's not possible. For keyboard you can define macro only on key press.
For game device buutons (joystick, gamepad) you can define different macro for up and down event, but anyway there's no script command to send only key down or key up message.
So I keep it as feature request which may be added in the future...
Petr Medek
LUAmacros author
Top

I'd like to second this request. On multiple occasions I'd need to hold down a key, currently only possible to send single keys.
(The game I'm playing distinguishes between different functions via single key, or long-press. For example tapping "n" brings down landing gear, but holding down "n" activates auto-land feature.) I'm trying to map this functionality to a game device (Thrustmaster MFD Cougar) and at least I don't think this is currently possible.
Top

This is now possible in luamacros, using lmc_send_input you can send only key press or key release.
But for luamacros you need to deal with lua scripting.
Petr Medek
LUAmacros author
Top

Can you give a line of example for "lmc_send_input" usage?
Top

Did you search this forum?
Petr Medek
LUAmacros author
Top

Yes, i searched and found this post viewtopic.php?f=4&t=3727 which shows

so i thought, since the "ALT" key will always be send to system no matter what,and that key is best for a "pushToTalk" key (ergonomically) 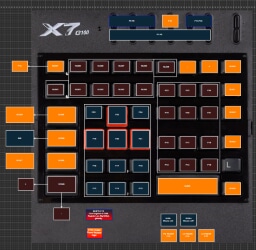 i thought i should send the "ALT+NUMPLUS" on ALT pressing
and "ALT+NUMMINUS" on ALT release.
the keycode that appears(in HDmacro's test area) when i press NUMPLUS is "189" and "223" for "NUMMINUS"

so this code come up to my mind.

But it does nothing and not give syntax for invalid errors. Ideally, i want it to send ALT+NUMPLUS on press and ALT+NUMMINUS on release.
These keys are meant for OBS and they make the camera appear and vanish. the send_keys function starts repeating.
I turned off repeating keys but hoping for a solution that does not require that. repeating keys, turns out to be awesome...

Update:
Well i could not solve the problem through lmc_sendinput but instead, by chance, after many hours or trial and error, i accidentally found it that, instead of using a special combination; for HOLDing a key without disabling repeating keys from windows completely, i used "ALT+V" by pressing and hoding them natively with my own fingers, and letting the luamacros, send a "+F13" on release., so alt+v does not repeat , does not interfere with anything i know of, and shift+13 for the out action that changes the scene.